Get Your Trash Out Of My Can

By admin • In Blog, James Barbour News • No Comments 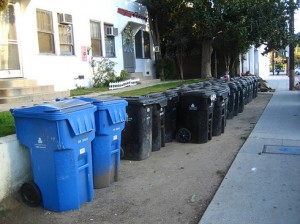 There is something afoot here in Southern California…an act running rampant among night crawlers and nocturnals.  It’s a most annoying ritual played out in the dark of night but when dawn breaks and day light envelopes the sky, the aftermath of what is left behind by these creatures of of the night leaves a few of us more than perplexed.

What is this deceptive and secretive act you might ask? Well I’ll tell you.

I’m always perplexed by this act.  I’m not talking a small bag of trash or a small soda can, I’m talking large trash bags and boxes from Flat Screen TV’s that end up in the bins.  I mean it’s not like they don’t have their own cans of refuse in which to dump the remnants discarded from their lives.  And moreover they’ve actually just stacked box on top of box (and all good recyclers know that you must break down the boxes for them to even be carted off).

What does this mean for us?  Well we’ve got no room left to discard our own trash thus our cans are filled with the garbage of others, whom we do not know, have never met and from some of the items they discard…I would never want to meet.   Subsequently my neighbors and I then I remove all of the items that are foreign to make room for our own items.

Now here’s where this gets interesting.  You would think that these usurpers would have a reason for not discarding their items in their own bins, be that lack of room from other usurpers, laziness (my guess) in not wanting to break down their own items to discard or perhaps because they are embarrassed by the actual times they are trashing.  In the end the motive of the Trash Can Usurper doesn’t really matter.

What I’ve found interesting is the intellect of one of my most recent usurpers.  This man discarded a large number of boxes, filled with other items next to my cans.  The Flotsam and Jetsam* within these boxes ranged from half eaten food, to empty cigarette boxes (DEFINITELY NOT MY TRASH) and other sundries.

I nodded. He continued to puff on his cigarette and I asked…”You live near here?”

He said “Yeah…right there.” and pointed to a a residence across the way from me.  I nodded.

“New to the neighborhood?” I asked.

“Where is home originally?”

I then asked nonchalantly “You didn’t happen to see who might have dumped their garbage here did you.”

“What?  Oh…nah.” he replied as if he were preoccupied.

As I began to move the boxes I noticed something stuck to three of them.  Three clearly printed UPS shipping labels each one bearing the same information.

Curious I looked up to him again and I said, “You sure you don’t know who this stuff belongs to?”

“Not a problem I said.”  I just have one little question.  “You said your name is Nicholas?”

“And you live right there?”

“And you don’t know who this stuff belongs to?”

“Ok…you do realize that you left all the shipping labels on your boxes before you threw them here?”

“Yes you did. And…uhh, they were all sent from Ohio.  That’s where you’re from right?”

“Yeah it does.” I just stood there looking at him…looking and waiting.  Finally he said,

“OK…well, sorry. Gotta go.” And with that he walked off.

I’m surprised he got out of bed this morning.

Nicholas…here’s to you and to your trash. May you enjoy re-removing it from your own trash.  (Needless to say I put it all back from where it originated).

Oh…and I hope you remember where you left your head. 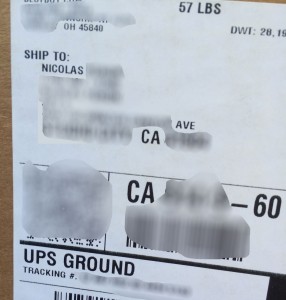