James will star as Jean Valjean in Les Miserables

of the Tony Award-Winning Best Musical 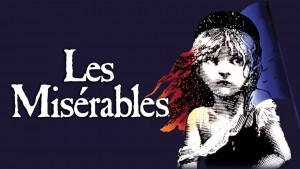 AT LA MIRADA THEATRE FOR THE PERFORMING ARTS!

“To love another person is to see the face of God…”

April 15, 2014…La Mirada, CA…LA MIRADA THEATRE FOR THE PERFORMING ARTS & MC COY RIGBY ENTERTAINMENT present the fifth and final production in its 2013-1014 season of shows with the Los Angeles regional theatre premiere of one of the most beloved musicals of all time, based on the novel by Victor Hugo, the Tony award-winning, LES MISÉRABLES, music by Claude-Michel Schönberg, book by Alain Boublil and Claude-Michel Schönberg, lyrics by Herbert Kretzmer, with musical direction by John Glaudini, choreography by Dana Solimando and directed by Brian Kite.  LES MISÉRABLES will star James Barbour as Jean Valjean and “American Idol” Season Four Finalist Anthony Fedorov as Enjolras.  LES MISÉRABLES will preview on Friday, May 30,  2014 (with a press opening on Saturday, May 31) and run through Sunday, June 22, 2014 at La Mirada Theatre for the Performing Arts, 14900 La Mirada Blvd in La Mirada.

ABOUT THE CREATIVE TEAM AND CAST

BRIAN KITE (Director) has directed across the United States and abroad. His La MiradaTheatre/McCoy Rigby directing credits include their critically acclaimed productions of Miss Saigon, Little Shop of Horrors, Dinner With Friends, Steel Magnolias starring Cathy Rigby, Driving Miss Daisy starring Michael Learned and David Auburn’s Proof. He is the recipient of the 2013 Los Angeles Ovation Award for Best Direction of a Musical for his production of Spring Awakening. He directed the recent National Tour of The Graduate for LA Theatre Works and in November, he staged the first production of Miss Saigon to ever play in China when his show closed the Macau International Music Festival. This past summer, he directed Top Secret: The Battle for the Pentagon Papers, starring Margaret Colin, which toured

throughout mainland China. The production was the first U.S. production of a play at Beijing’s National Center for the Performing Arts (NCPA). Prior to that, he helmed a production of Cabaret in Bermuda under the patronage of the Queen’s Governor and directed Tennessee Williams’ The Glass Menagerie at The Actors Co-op in Hollywood. Other recent credits include two Los Angeles revivals, J.B. by Archibald MacLeish and The Crucible by Arthur Miller, as well as the West Coast premiere of Václav Havel’s The Beggar’s Opera. He directed the Philadelphia production of Glenn Wein’s Grandma Sylvia’s Funeral and worked with Tony Award-winning director Daniel Sullivan on The Geffen Playhouse’s production of Hedda Gabler starring Annette Bening. He directed over 20 productions at French

Woods Festival in New York where he was the Director of Theater Programs for over 7 years. Brian is a member of the directing faculty at U.C.L.A.’s School of Theater, Film and Television, serves as the Chair of the LA Stage Alliance’s

Board of Governors, and is the Artistic Director of the award-winning Buffalo Night’s Theatre Company.

He co-wrote the revues, Are We There Yet?, A Christmas Survival Guide, and I Love New York  (NY Bistro Award – Best Revue) which have been playing throughout the country.  His career began assisting composer Stephen Flaherty on the shows Lucky Stiff, Ragtime, Seussical, and the film Anastasia.   He has worked in the music departments on the pre-Broadway productions of 9 To 5 (LA), Legally Blonde (San Francisco), Spamalot (Chicago), Bounce (Kennedy Center), and A New Brain (NYC)–to name a few.  He is a member of the Dramatist Guild and an alumni of the BMI Workshop in NYC.  As a composer, his show, How The Nurse Feels was accepted into the Disney/ASCAP workshop (LA). A revue of his music was performed at Birdland in NY.

JAMES BARBOUR  (Jean Valjean) was nominated for the Drama Desk, Drama League and Outer Critics Awards for Best Actor in a Musical for his portrayal of Sydney Carton in the Broadway musical version of A Tale of Two Cities, and won the Sarasota Magazine Best Actor Award for the Asolo Rep pre-Broadway production. He has starred on Broadway in such Tony-Award winning shows as Stephen Sondheim’s Assassins, Disney’s Beauty and the Beast as The Beast, Carousel as Billy Bigelow, Urinetown as Officer Lockstock and as Edward Rochester in Jane Eyre (Drama League Award nomination). He also appeared in the Broadway production of Cyrano and the national tour of The Secret Garden.   His voice can be heard on the upcoming international recording of A Tale of Two Cities, the PS Classics recording of Assassins, the Sony Classical cast recording of Jane Eyre, The Gift on Geffen Records, the upcoming release of Frank Wildhorn’s Dracula, as well as on the live CD recording of his self-produced stage show Broadway in Concert (for which he won an LA WEEKLY Garland Award).   His television credits range from the pilots of “The District,” “Just Shoot Me” and “Flashpoint” to appearances on “Sex and the City,” “Ed,” “That’s Life,” “Some Enchanted Evening: Celebrating Oscar Hammerstein” (PBS), “Beauty and the Beast: A Concert on Ice” (CBS), the PBS mini-series “American Experience: John & Abigail Adams” (playing Thomas Jefferson) and the upcoming film version of A Tale of Two Cities for public television.  Film credits include Alchemy (Tribeca Film Festival and ABC Family) starring opposite Tom Cavanagh and Sarah Chalke; Adam Sandler’s Eight Crazy Nights, Waiting for Lefty, The Tell-Tale Heart and Twinkle Toes with Sally Kirkland.

As an author and producer, James is responsible for creating three concert series, James Barbour: The Holiday Concert and Love Songs (both at New York City’s famed Sardi’s Restaurant) and Back From Broadway/Broadway in Concert (the latter in conjunction with Steinway Concert Artist Hershey Felder).   Mr. Barbour is considered one of the most sought-after performers on Broadway today. He is on the A-list of actors asked to develop new works for the industry’s leading writers and composers including Elton John, Bernie Taupin, Frank Wildhorn, and Christopher Durang to name a few. He is currently developing a new musical concert called The Romantics. Mr. Barbour has worked tirelessly in support of Broadway Cares/Equity Fights AIDS and is on the Artists’ Committee of The Actors Fund.

The design team for LES MISÉRABLES is as follows: The Scenic Design is by Cliff Simon. The Lighting Design is by Steven Young.  The Sound Design is by Josh Bessom.  The Costume Design is by Colleen Grady.  Hair and Wig Design is by Katie McCoy.  The Props Coordinator is Terry Hanrahan. The Casting is by Julia Flores. The Production Stage Manager is Jill Gold.

ABOUT THE SCHEDULE AND PRICING

LA MIRADA THEATRE FOR THE PERFORMING ARTS is located at 14900 La Mirada Boulevard in La Mirada, near the intersection of Rosecrans Avenue where the 91 and 5 freeways meet. Parking is free.

To schedule press interviews, photos, press comps or for additional information, please contact David Elzer/DEMAND PR at 818/508-1754 or by e-mail at DAVIDELZER@ME.COM or visit www.demandpr.com. Photos and press information also available at lamiradatheatre.com.

Winner of the L.A. Stage Alliance OVATION AWARD for 2012-2013 “Best Season of the Year,” LA MIRADA THEATRE FOR THE PERFORMING ARTS, now in its fourth decade, has been hailed by the Los Angeles Times as “one of the best Broadway-style houses in Southern California.”  This beautiful state-of-the-art theatre has been producing quality productions for its Southern California audiences since 1977.  The theatre has produced several national tours and is the recipient of many accolades including Ovation and Emmy Awards and Tony Award nominations.  Brian Kite is the theatre’s Producing Artistic Director. The theatre is located at 14900 La Mirada Boulevard in La Mirada, California, near the intersection of Rosecrans Avenue. Parking is theatre-adjacent and free. For further information call 562-944-9801 or visit  www.lamiradatheatre.com.

Celebrating its 20th Anniversary season at La Mirada Theatre for the Performing Arts, McCOY RIGBY ENTERTAINMENT (MRE), is one of the world’s premier theatrical production companies. Headed by Executive Producers Tom McCoy and Cathy Rigby, MRE has produced over ninety Broadway-caliber musicals, plays, and concerts featuring some of the biggest stars working in the industry today.

OPENS SATURDAY, MAY 31 THROUGH SUNDAY, JUNE 22!

PERFORMANCES: Wednesdays & Thursdays at 7:30pm; Fridays at 8pm; Saturdays at 2pm and 8pm; Sundays at 2pm.